LET US DREAM: The Path to a Better Future

LET US DREAM: The Path to a Better Future Assembly Schedule – What Did We Do?

1st Keynote: Bishop John Stowe, OFM Conv.
Title: Fratelli Tutti: π The Magisterium of Pope Francis
and Its Challenge for the U. S. Church

3rd Keynote : Mary Novak
Title:  Decenter and Transcend: A Priesthood for the Healing of our Church and World

4th Keynote: Cardinal Turkson
Title:  Renewing the Spirit of Vatican II is Essential to our Path to the Future 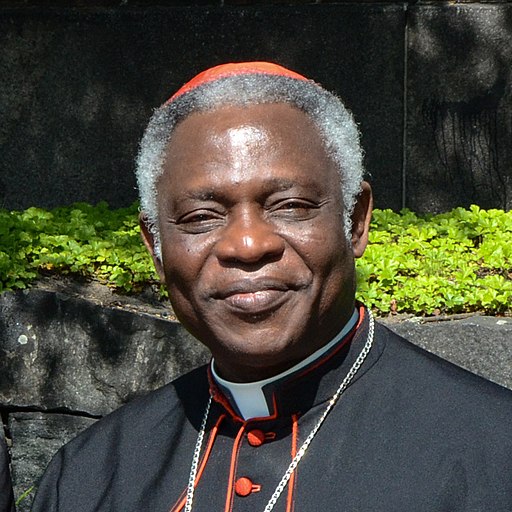 Born in 1948 in Ghana, Cardinal Turkson studied theology at St Anthony-on-Hudson Seminary in New York and was ordained a priest in 1975. He did graduate studies at the Pontifical Biblical Institute in Rome, 1976-80 and 1987-92. In 1992 he was appointed Archbishop of Cape Coast by St John Paul II and made Cardinal in 2003.

He made news in the United States in October 2021, with headlines such as “Top Vatican cardinal says Biden should not be denied Communion” reported by National Catholic Reporter.

In 2016, the National Catholic Register described the new position as overseeing what had once been four pontifical councils.

The new “super-dicastery” . . . will focus in particular on assisting and accompanying migrants, those in need, the sick, the excluded and marginalized, the imprisoned and the unemployed, as well as victims of armed conflict, natural disasters and all forms of slavery and torture.

All the duties that had been carried out by the Pontifical Councils for Justice and Peace, Cor Unum, Pastoral Care of Migrants and Itinerant People, and Health Care Workers will also be merged into the one dicastery.

As of this writing, the title and focus of Cardinal Turkson’s keynote address are under discussion.

John Eric Stowe professed solemn vows as a member of the Province of Our Lady of Consolation of the Order of Friars Minor Conventual in 1992.

His academic background includes an undergraduate degree with a double major in history and philosophy from St. Louis University, and a Masters of Divinity and a Licentiate of Sacred Theology from the Jesuit School of Theology in Berkeley.

Stowe was ordained a priest in 1995 and served parishes in the Diocese of El Paso where he also managed the diocesan chancery and served as vicar general for Bishop Armando Ochoa. In 2012 he was elected Vicar Provincial of his Franciscan Province.

Pope Francis appointed him Bishop of Lexington in 2015. He attracted national attention in 2019, when he wrote an op-ed condemning students who wore apparel supporting President Donald Trump during the March for Life rally in Washington, D.C.

In March 2021, Stowe expressed support for the proposed Equality Act which the USCCB opposes. He wrote that “As a Catholic bishop, I hate to see any form of harmful discrimination protected by law and it is consistent with our teaching to ensure that LGBTQ people have the protection they need.”

Among public positions, Bishop Stowe has supported immigration activists, mandated Covid-19 immunization for diocesan employees and opposed the Eucharistic document that was approved by the U.S. bishops in November 2021.

Stowe has served as president of the board of Pax Christi USA and is a member of the Association of U.S. Catholic Priests.

— Some information provided by Wikipedia

Commonweal November 8, 2021: The Church Must Be Political: An interview with Bishop John Stowe

Commonweal May 22, 2018: Traditional Disobedience: Renewing the Legacy of Catholic Activism

January 6, 2021: ’You reap what you sow’: Some bishops decry violence at Capitol Daniel P. Horan is the Director of the Center for Spirituality and Professor of Philosophy, Religious Studies, and Theology at Saint Mary’s College in Notre Dame, IN. He previously held the Duns Scotus Chair of Spirituality at Catholic Theological Union in Chicago. Horan received his PhD in theology from Boston College, MDiv and MA from the Washington Theological Union (DC), and a BA from St. Bonaventure University.

He is a columnist for National Catholic Reporter and the author of fourteen books including the award-winning Catholicity and Emerging Personhood: A Contemporary Theological Anthropology (2019) and The Franciscan Heart of Thomas Merton: A New Look at the Spiritual Influence on his Life, Thought, and Writing (2014). His most recent books are A White Catholic’s Guide to Racism and Privilege (2021) and The Way of the Franciscans: A Prayer Journey Through Lent (2021).

His current book projects include the tentatively titled: Not Because of Sin: Reconsidering the Reason God Became Human (Liturgical Press).

Horan is also the author of numerous popular and scholarly articles; is a frequent lecturer and retreat director around the United States and abroad; and has previously taught at Durham University, Catholic Theological Union, Siena College, St. Bonaventure University, and in the School of Theology and Ministry of Boston College.

Horan currently serves on the Board of Trustees of St. Bonaventure University in New York, the Board of Regents of the Franciscan School of Theology in California, and served many terms on the Board of Directors of the International Thomas Merton Society. He is also the co-host of The Francis Effect Podcast. Mary Novak, a member of the Congregation of Saint Joseph, began serving as Executive Director of NETWORK Lobby for Catholic Social Justice in April 2021. She is a lawyer, educator, chaplain and spiritual director, restorative justice practitioner, and activist who has worked in Catholic contexts for decades.

Prior to leading NETWORK, Mary served as a Mission Integrator, and Adjunct Professor of Law at the Georgetown Law Center in Washington, D.C. In this role, she worked at the intersection of spirituality, psychology, and the work of justice, creating the conditions for law students, staff and faculty to grow in trauma-informed lawyering and pedagogy in the Ignatian Tradition.

Novak succeeded Sister Simone Campbell, a member of the Sisters of Social Service, who was at the helm of NETWORK since 2004. Campbell wrote the “nuns letter” in support of the Affordable Care Act, and led the “Nuns on the Bus” campaigns.

Novak is a graduate of Santa Clara University Law School; she earned a Masters of Arts in Pastoral Studies from Washington Theological Union. She served the Leadership Conference of Women Religious as they navigated the Doctrinal Assessment with the Vatican’s Congregation for the Doctrine of the Faith.

From 2014 to 2020, Novak served as the founding Chair of the Board of the Catholic Mobilizing Network which is part of the Congregation of St. Joseph Mission Network, a strong and stable non-profit working to end the use of the death penalty and promote restorative justice. Author of From Hero to Servant to Mystic: Navigating the Deeper Waters of Priestly Spirutality

Father Scott Detisch is a priest of the Diocese of Erie, Pennsylvania. He is involved in parish ministry and priestly formation and currently serves St. John the Evangelist Church in Girard, Pennsylvania.

His book, From Hero to Servant to Mystic: Navigating the Deeper Waters of Priestly Spirituality (Liturgical Press, Collegeville, Minnesota) addresses both the initial and ongoing formation of priests by tracing three stages in how their spiritual lives unfold. His book received first place honors from the Catholic Press Association in the Catholic Professional category.

Detisch is an adjunct faculty member in Systematics and Liturgy at Saint Mary Seminary and Graduate School of Theology in Wickliffe, Ohio. His book, according to the seminary website, offers seminarians, priests, spiritual directors, and clergy personnel directors a way of understanding the whole gamut of spiritual growth and development in priests by focusing on three major clusters of energies within men — the Hero, the Servant, and the Mystic. By applying these energies to their spiritual lives, priests will experience a different form of relationship with the person of Christ — the Hero offers his life for Christ; the Servant ministers with Christ; and the Mystic lives his life in Christ.

In a feature in Faith Magazine, from the introduction to his book, Detisch describes a canoe lesson from a park ranger. “He told us to look for the darker colored stream in the midst of the river. That was where the water was deeper and more easily navigable.” He calls that an apt metaphor for his own spiritual journey. Michelle is a native of Buffalo, New York and entered the Congregation of the Sisters of St. Felix of Cantalice (Felician Sisters) there 33 years ago. Over time she has ministered as a junior high and high school teacher, a licensed acute care physical therapist, and in a “ministry of presence” on the streets of Pomona, CA with persons who are homeless and victims of trafficking. After eight distinct Felician provinces joined together to become one North American province in 2009, Michelle was elected to serve on the second leadership team of Our Lady of Hope Province as a provincial council member. Upon completing her six-year term in elected leadership, Michelle joined the staff of LCWR National where she currently serves as Associate Director for Mission Collaboration.

Michelle served LCWR National as a board member and continues to serve as a board member for the Leadership Collaborative. She has varied experiences in adult education, public speaking, retreat work, and has served on many committees in her lifetime.

EDUCATION:  Michelle holds a BS in biology from St Bonaventure University with a minor in Peace, Justice, and Conflict Resolution. She earned a BS/MS in physical therapy from D’Youville University and licensure in New York State. Michelle is certified by the American Physical Therapy Association as a clinical instructor. She completed the Collaborative Leadership Development Program (CLDP) in 2014, the Facilitation Leadership Pathway through LCWR in 2021, and is currently enrolled in Leadership and Life Coaching for Religious Women through the Benedictine Sisters of Erie, PA, an International Coaching Federation (ICF) certification program.